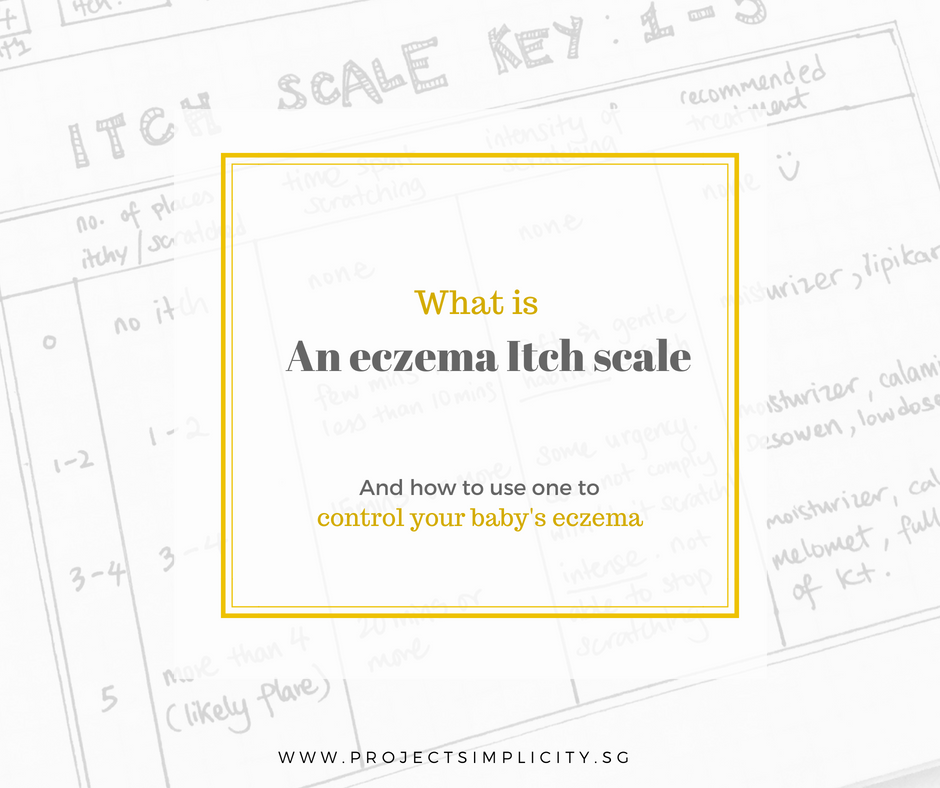 For the past year, I having been using a bullet journal tracker to chart Corey’s eczema. I charted an itch scale, hoping to find some correlation between his triggers, rashes and itch. But with multiple food and environmental allergies I saw no pattern. However, I stuck with it for a few months and discovered a surprising use for it in simplifying our eczema battle. It gave me a useful guide to monitoring and administering his medications.

The problem of  appropriate medication for eczema and allergy

A common problem for parents whose babies develop eczema at a very young age is knowing when to medicate appropriately. It is a tricky situation as parents understandably want to reduce dependence on medications and creams in young children. Our doctor’s instructions was creams twice a day and antihistamines twice a day when required.

With both food and environmental allergies involved there was no predictability in Corey’s condition. Everything felt like it was causing a flare (which occured weekly). There were so many moving parts I was drowning in constant bombardment of rashes, reactions and itch cycles. It felt like he required medications and creams all the time.

Like so many parents before and around me, I too was paranoid about medications and creams. When is it required and when should I not use?

This was a lesson I learnt the hard way as Corey’s skin got worse.

However, once I started simplifying and tracking his eczema and allergies, I gained better control over his condition. The itch scale gave me a way to observe his itch in a methodical fashion that reduced guesswork. Once I could do this (together with other simplifying measures), I was able to stay on top of his treatment as directed by his allergist whilst knowing I was not over medicating.

I stopped feeling controlled by his medications. Instead, I was able to taper a treatment plan based on the severity of his flare and itch.

When I first started tracking his itch he was one year old, the only way Corey could articulate his discomfort was through scratching. With only my powers of observation, I had to find an easy way to quantify the itch and translate it into a key I could follow for his treatment. I numbered my itch scale from 0 – 5. You can use any numbered scale you like as long as you can break down each unit into describable quantifiable factors.

I broke my itch scale down into the following elements: 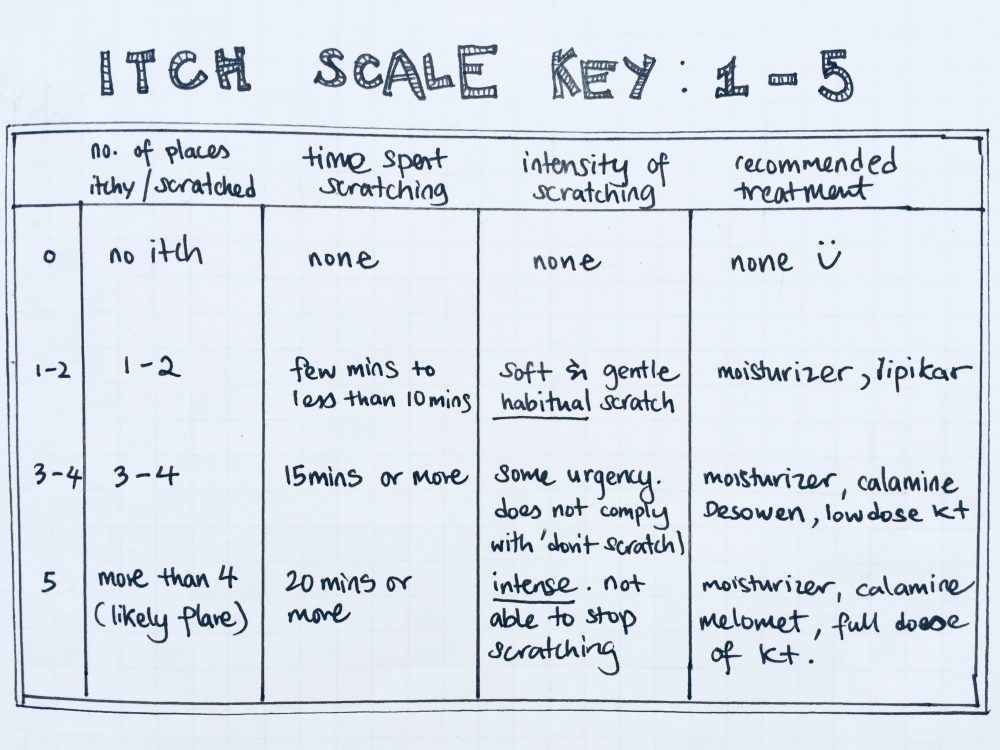 Number of places with rash

When we started out, the eczema covered 80% of his body. So it was important for me to track the number of places that were covered in rashes. Intuitively, the more places with rashes, the higher on the scale his itch became. It also meant the higher likelihood of a allergic reaction.

Again, because he could not describe his itch, I use the length of time spent scratching as a barometer of how itchy an area was. If he spent more than 10 minutes scratching any area or multiple areas, I knew I had to do something to sooth that itch.

Children (and adults alike) with eczema prone skin can sometimes develop habitual scratching. Corey, like any normal baby gets bored at times and would pick at his skin. So I found it useful to observe the intensity of his itch. I found that as long as he could not be distracted and did not respond to requests to stop scratching, I had to do something to sooth the itch. 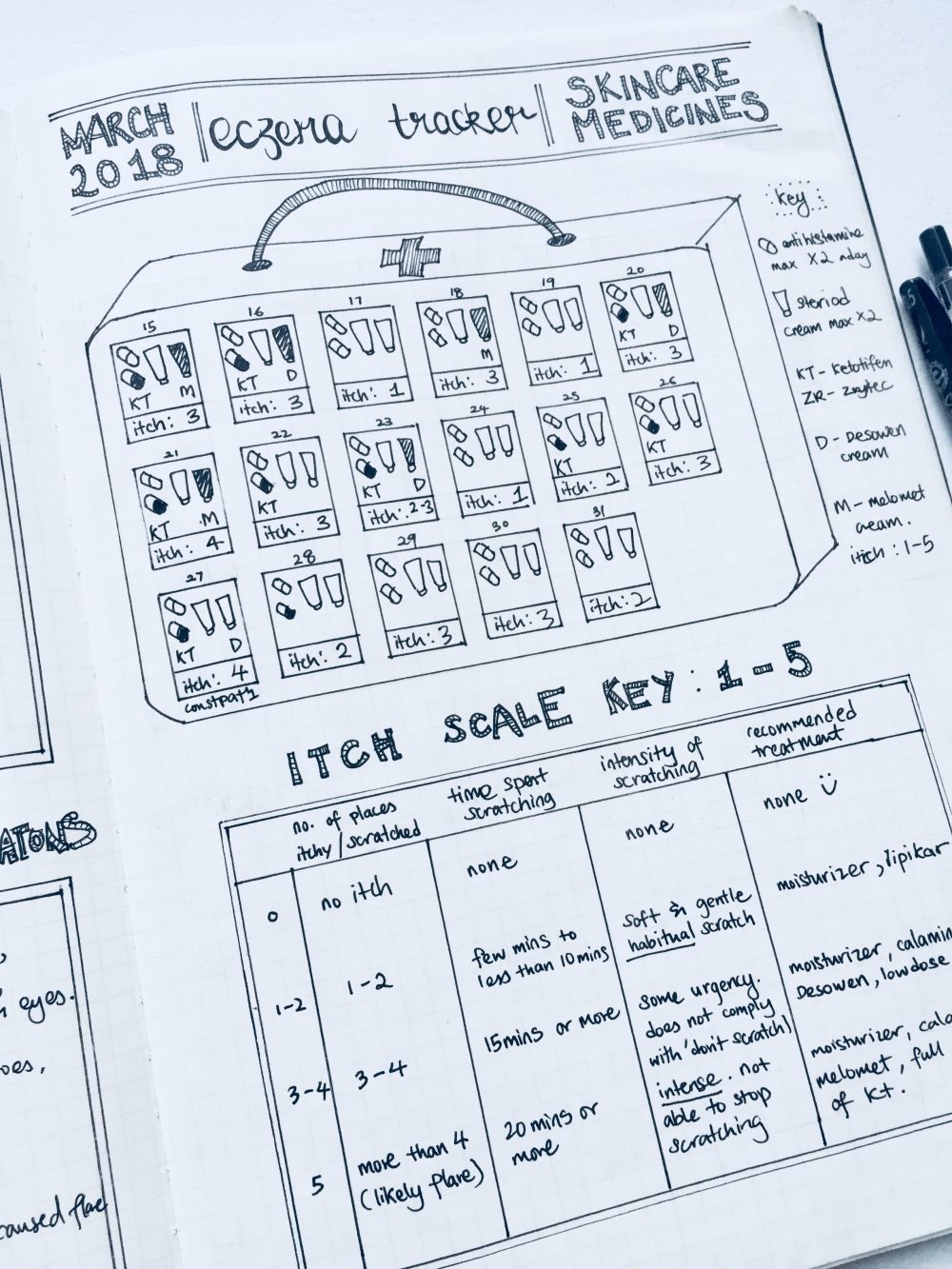 Other factors in how to use the itch scale successfully

I learnt this from Corey’s allergist. Allergies and eczema may sometimes required prolonged standby usage of medications and creams. We’re talking months and years here.

The first step in successfully developing your own itch scale is to know the maximum safe dosage of required medications. With this information, you can work out how much to give and when. You can also work your way down and reduce usage on good days.

Always, always discuss this maximum and minimum safe dosage with your allergist and trusted healthcare professional.

Reduce complication with sticking to the same medications and creams

If you have seen as many doctors as we have, you would have amassed a good collection of creams, antihistamines, and what nots. Stick to what your doctor says and avoid complicating things by throwing other medications in the mix. Once I found correct medications and creams, I threw away the rest. In fact, I only use one moisturiser for which you can read about at this link. 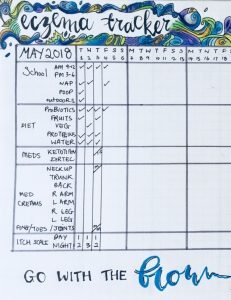 I know its hard to keep up with an allergic baby, but the consistency has done wonders to simplify our eczema battle. Once your scale is done, just spend 2 minutes daily thinking and recording how the itch is affecting your baby.

I spilt my itch tracking into twice a day (day time and night time itch) as I do his skincare routine twice a day to check for rashes. You can build a full table to track other items for your baby which you can find examples for in my May Eczema Tracker.

Give it a try!

This method is useful for those struggling with investigating triggers, has chronic eczema that is hard to bring under control. I used this method to get my baby’s eczema to what I call a steady state.

Do you think this is useful and something you would try? Or if you are tracking your baby’s eczema and allergies do give me feedback. Send a shoutout if you would like a template of any of my trackers.