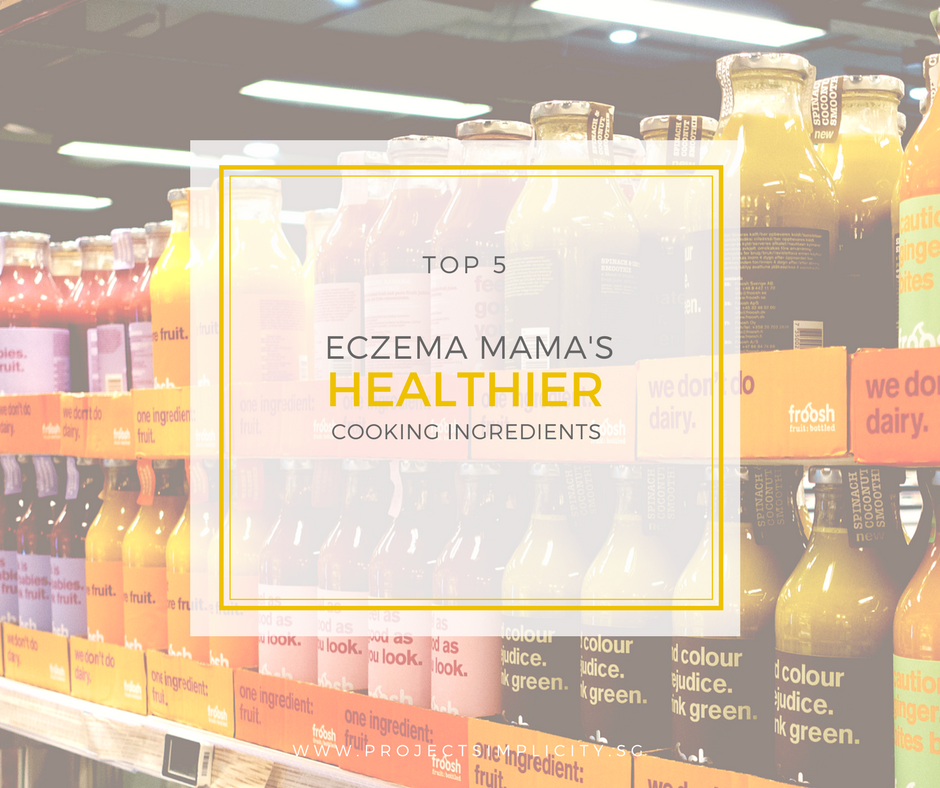 Research shows that 0.5 – 1% of children have adverse reactions to food additives. In the grand scheme of things this is a small percentage. But it does point to an issue that some harmful artificial chemicals and flavourings could be a subtle growing problem. Especially in fast paced city life where convenience rules. Take outs and eating out has become a normal daily regime. And this would be all good, if we knew that what we were eating are healthy nutritious meals. However, more often than not, restaurants and food stalls utilise quick and dirty ways to enhance flavours using harmful additives. Even for home cooks, a lot of common kitchen ingredients are laden with chemicals.

According to “The Pediatrician’s Guide to feeding babes and toddlers”, children before the age of 2 have immature kidneys incapable of processing a big amount of salt. This implies that a lot of canned foods, stock cubes and condiments are technically off limits to our littlest ones.

The daily recommended intake for sodium is less than 1500milligrams…or about half a teaspoon, for 1 to 3 year olds.

Taking the path of least resistance where ignorance ≠ bliss

No eczema mamas (even mamas whose children do not have eczema) would happily overload their young babies with ingredients like sodium benzoate (E211) and flavour enhancers like monosodium glutamate (MSG). Most of us are doing it either grudgingly or unknowingly. I can understand why. I used to be one of these mamas who are constantly strapped for time, juggling hectic work schedules and caring for young babies. Taking the path of least resistance and succumbing to the most convenient options available meant everyone stayed fed and alive. But even in my after-work-brain-dead state, I often felt my conscience pricked during dinner time, thinking I should do more to feed my kids healthier foods.

In these moments, my top reasons (which I am sure all mamas have) why I simply could not do it are:

Still, the little nagging voice of reason would constantly remind me that these are simply excuses. So one day, I told myself I had had enough and made the following list to encourage myself to overcome these excuses. If you find it useful, save it, print it and stick to your fridge, pin in on your Pinterest, share it on your Facebook! 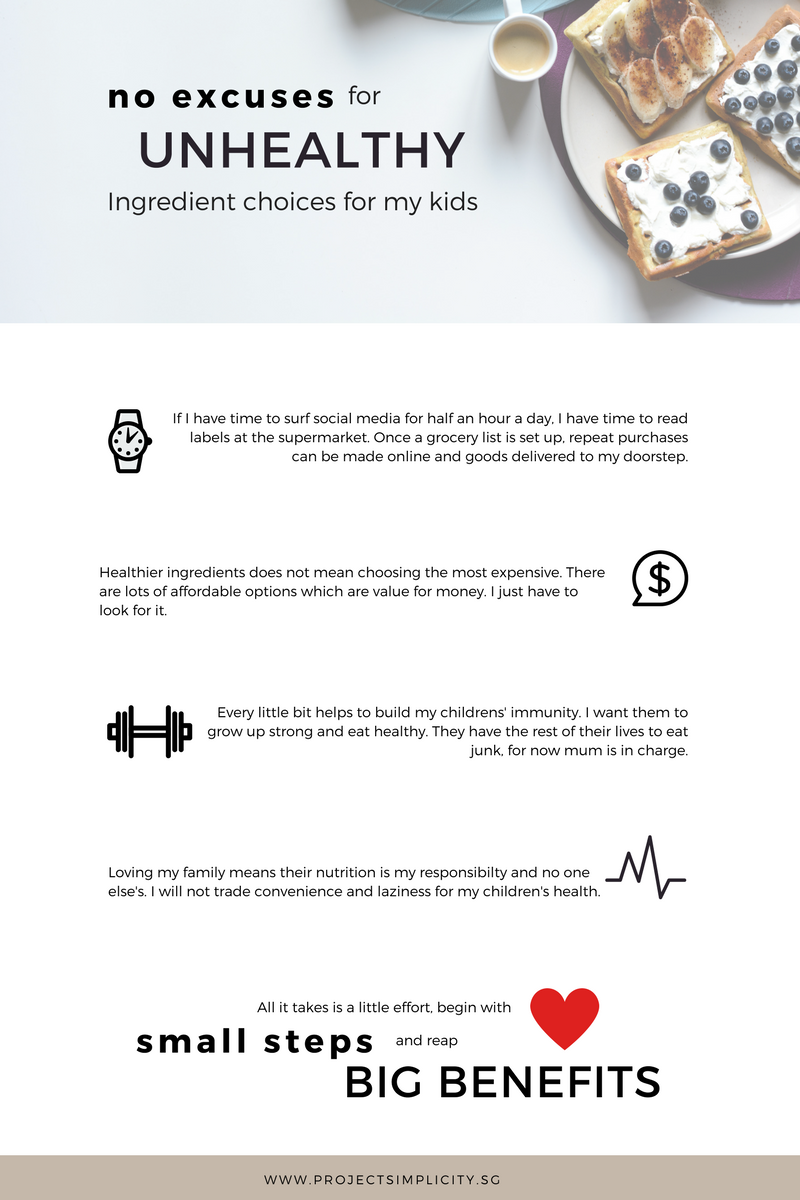 These small steps are easier than most think

Since starting on Corey’s healing journey, I’ve spent a good part of this year overhauling my kitchen. There are indeed many factors to consider and many people know they want to make a switch to healthy, but are simply stumped at where to begin?

Convenience, laziness, too many easily available tasty unhealthy options just distracts them from the task at hand. I admit, if Corey’s condition hadn’t been so serious I’d probably feel the same and succumb to what is easy. Having spent the most part of this year researching, I have found that taking small steps by changing just a few essentials to start greatly encouraged me to do more.

Start by switching the following top 5 commonly used cooking ingredients to healthier options. These items are easy to find and affordable so starting here builds a momentum for more.

Most of us are familiar with using extra virgin olive oil as a healthy oil in cooking.

So it came as a surprise to me when I learnt from “The Eczema Diet” that the more extra virgin an oil is, the more easily it burns and becomes bad for health. Most stir-fries and baking require a temperature of 200°c (400°F) and guess what? Extra virgin olive oil burns at 190°c (375°F).

I have not found safflower oil in our local supermarkets yet and avocado oils are extra virgin and expensive. Between these options, rice bran oil has become my kitchen staple due to availability and cost. At S$7.30 (on offer till 29th September at all NTUC supermarkets!!) for 2 litres this is pretty affordable. I have not researched into the cold pressed or organic options, for now I’m happy this is healthier and cheaper than extra virgin olive oil. Not to mention that rice bran oil also has a nice mild taste so it is suitable for baking and cooking with. 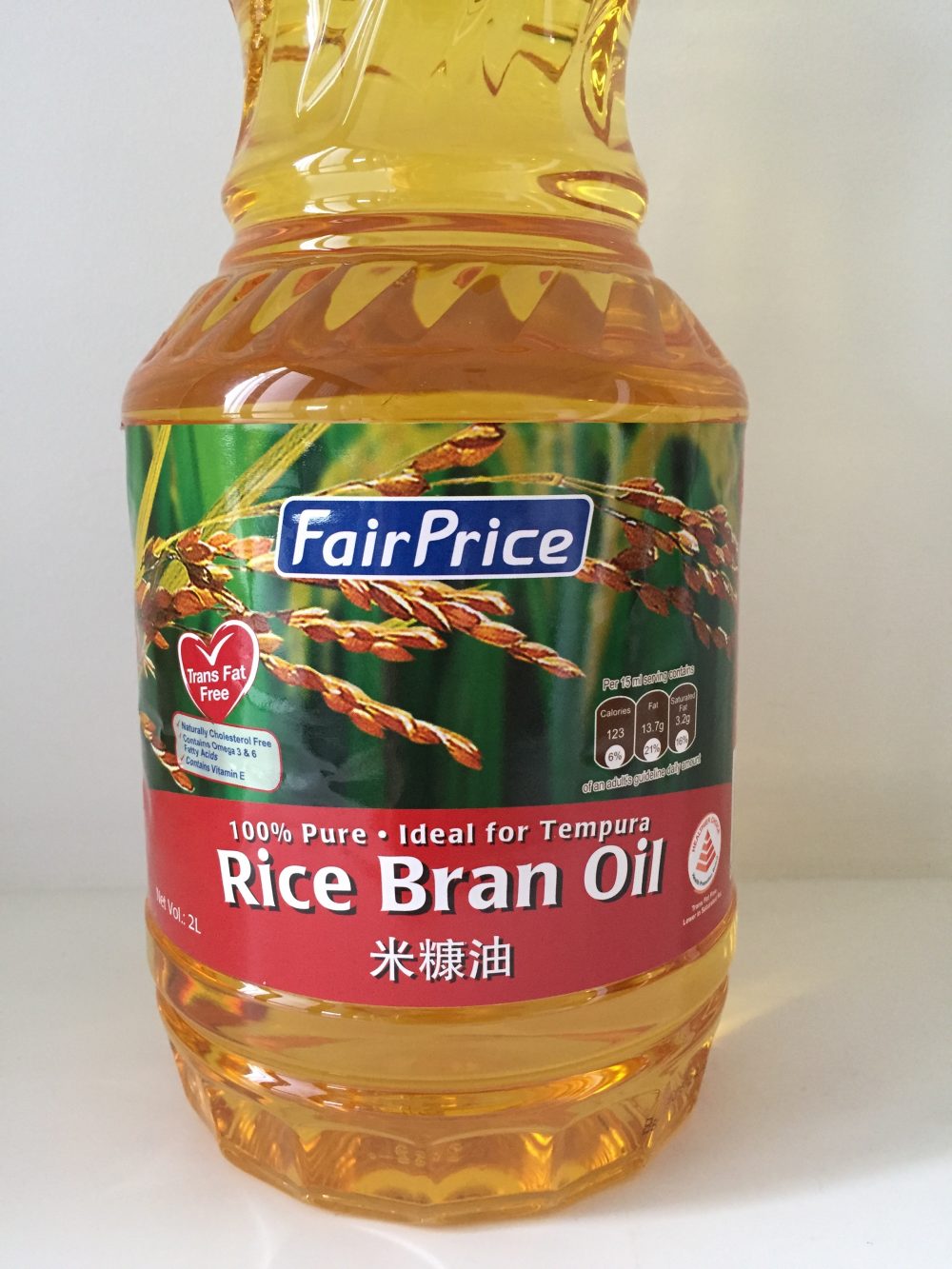 Like all typical Chinese families, soya sauce is our daily work horse and my kitchen goes through a bottle a month. So I knew I had to find a healthier soya sauce. Sadly, majority of popular household brands in major supermarkets all have chemical additives (those denoted with an ‘E’ and 3 numbers). Also, the soy beans used are not declared Non- GMO.

After scrutinizing many labels, I found ‘AAA Premium Seasoned Soy sauce for seafood’. It does not have any additives, uses Non-GMO black soybeans and is gluten free. It originates from Taiwan, costs S$5.20 and can be found in all major supermarkets. Kikkoman brand also has a gluten free option, however the beans are not declared as non-GMO. Anyway, the prevalence of gluten allergy is very low in Asia. Unless you have been diagnosed with Celiacs disease, there is no need to avoid gluten in a big way. If you do not mind paying 20% more (roughly S$1.20 more), you can go for organic ‘Bragg Liquid Aminos’. I use Bragg when cooking Corey’s meals. The AAA brand has a lighter fishier taste, while Bragg has a sharper saltiness. 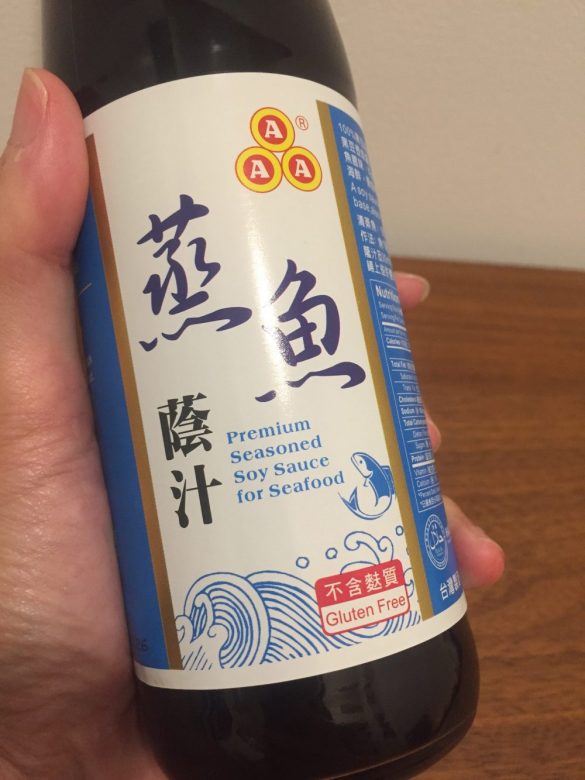 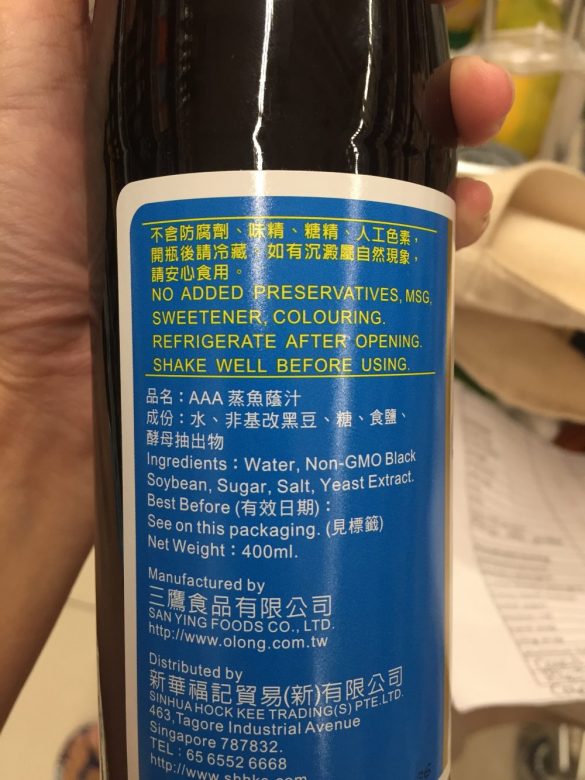 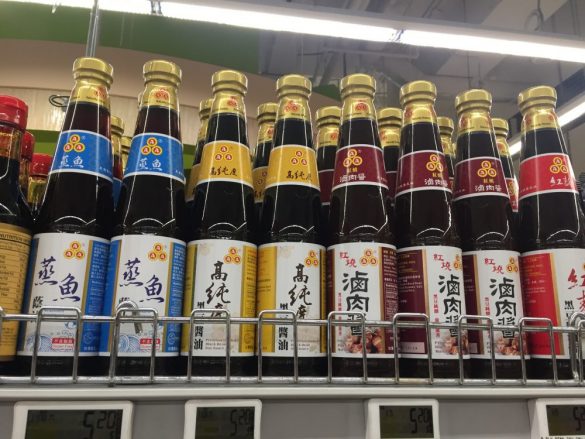 The AAA range of products 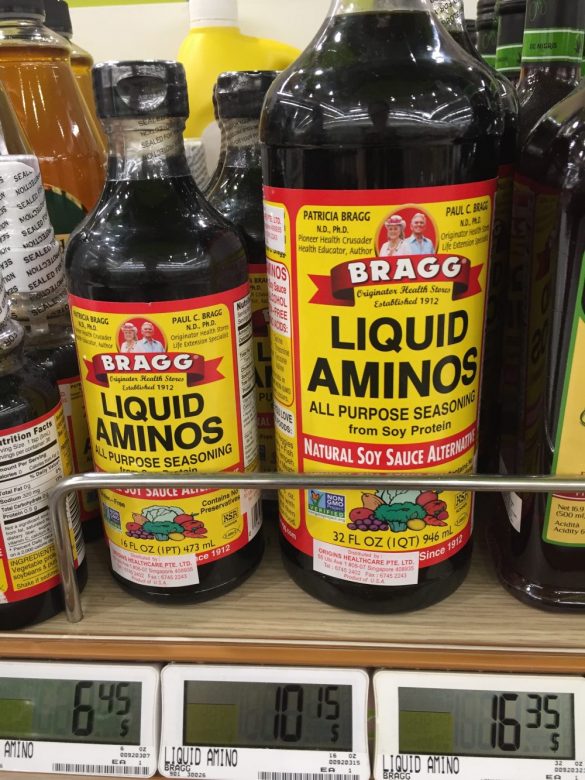 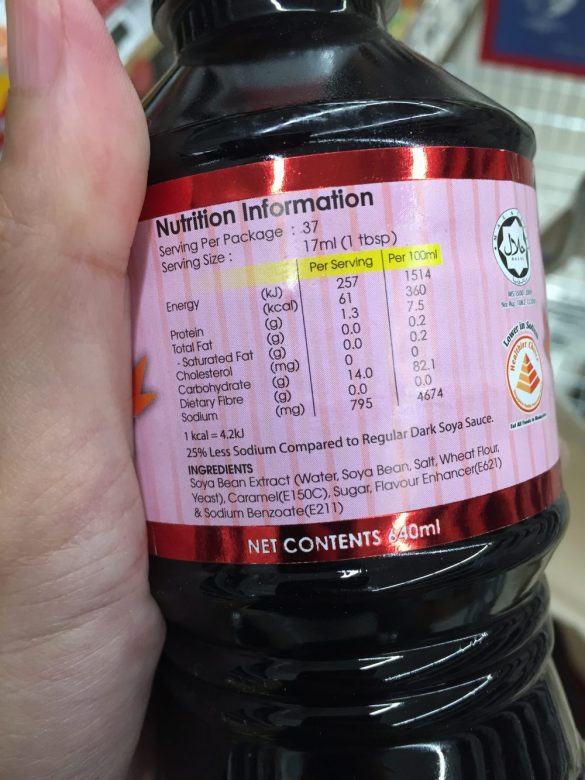 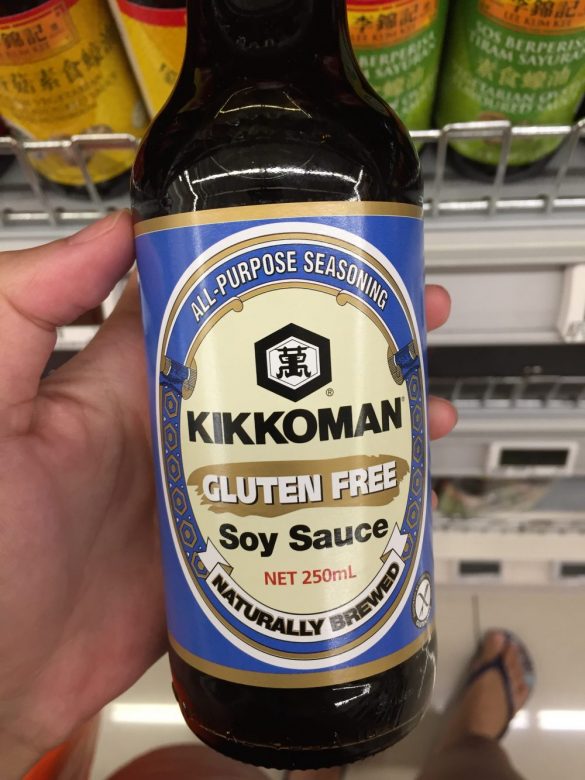 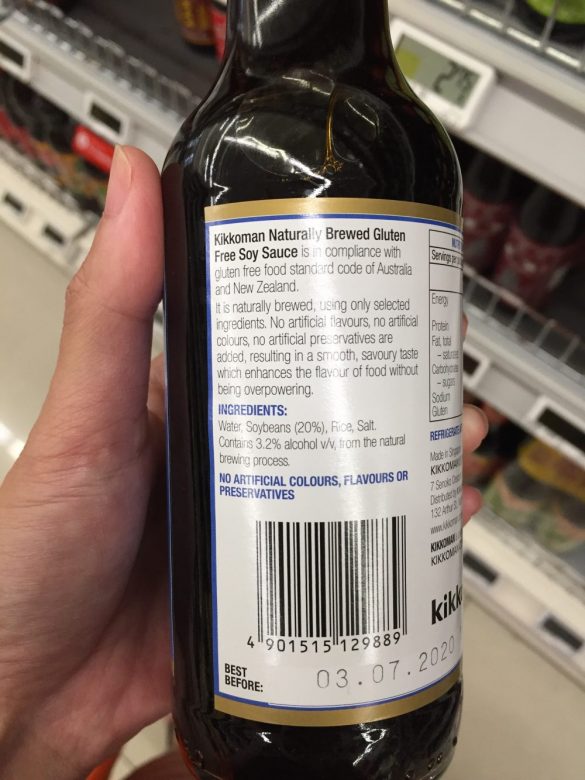 Commercial brands of ketchup contain high fructose corn syrup. I might be able to live with this fact, if my kids were only having a morsel now and then, but boy they are OBSESSED with ketchup. There was one stage where, to my horror, my older son would not eat anything unless there was ketchup on it. Thank goodness that stage is over. I simply kept insisting he could only have smaller amounts of ketchup at every request and over time he kind of forgot about it. Therefore, I realised that I had to stock a healthier option for those days when they just won’t eat without it. There is Annie’s organic ketchup which I have yet to try due to lack of availability. The brand I buy is Hunts which does not contain high fructose corn syrup and can be found in all major supermarkets islandwide. 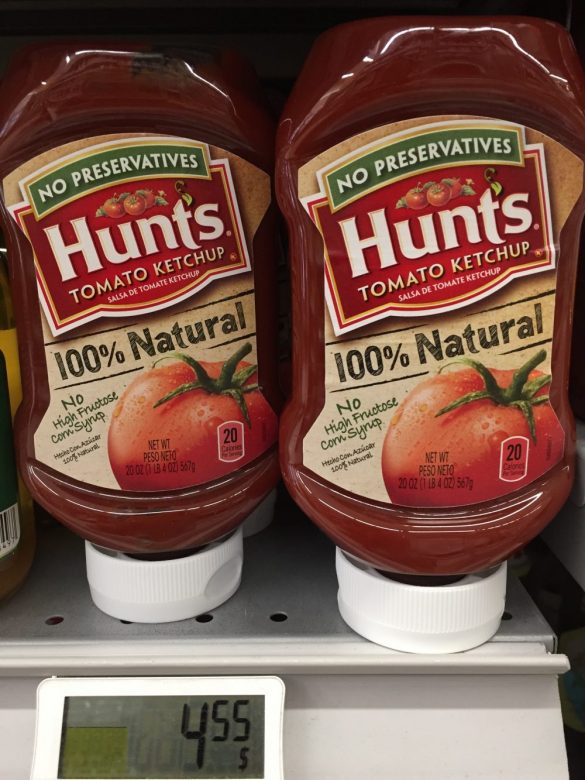 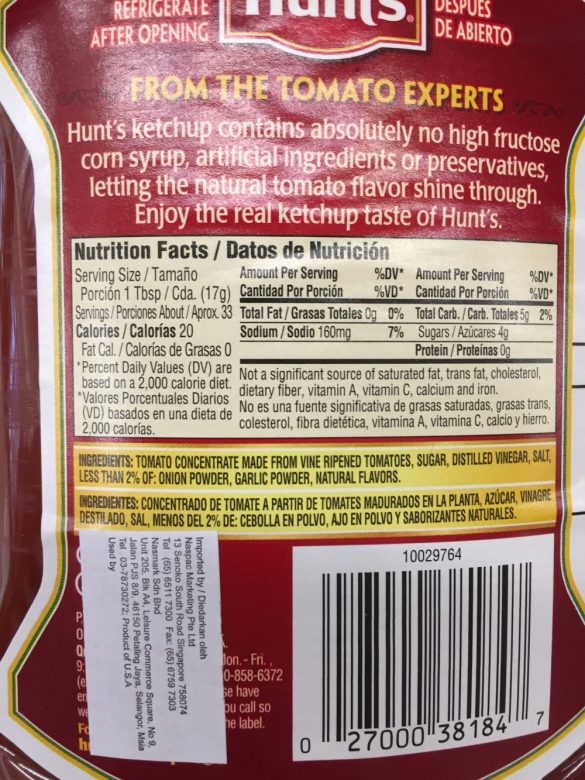 We love our jasmine rice. Soft and fluffy, after eating a hot steaming bowl, it makes you feel full and contented. So for a long time I have been hesitant to make the switch to healthier options. For a while I bought basmati rice just for my kids, but they did not take a liking to this really expensive grain. Now, I have moved on to unpolished brown rice which has been better received. But on the health scale it is approximately 20% better on the glycemic index than jasmine rice, has a nutty chewy taste which my kids love.

With rice, the quantity of intake is more significant than quality. The aim is to reduce the rate at which your body digests the carbohydrates. So while I have made the switch to feeding my boys unpolished brown rice, I have also made a concerted effort to reduce the rice the eat. How I do this is pretty easy, I just load their plate with vegetables and protein so that these are equivalent to the amount of rice there is.

I am also trying out the ancient art of soaking rice in acid overnight to break down the phytic acid in grains. This anti nutrient is found in many grains and needs time and a light acid to breakdown. We don’t mind the slight vinegar taste and the texture is not as waxy after soaking.

I use chicken stock for a lot of things. Sauces, soups, cooking rice. When ever I was short of time it was easy to flavour simple meals for the family. It was my go to cooking ingredient because of its versatility.

Till Corey’s eczema and food allergies that is.

That was when I started seriously reading the labels on these packagings. I was shocked at the amount of allergens found in commercial chicken stock. They contain milk, gluten, crustacean, soya, fish and mustard. They might as well have thrown in a raw egg to complete the party.

And it was not just the common brands, the premium brands are also laden with salt. Recall at the beginning of this post that daily recommended amount of salt for 1 to 3 year olds is half a teaspoon? These would definitely burst that quota sky high.

I did not have many options while we were on holiday in Australia. I used Pacific organic chicken broth in making Corey’s meals. It was really salty. As a result his skin suffered. 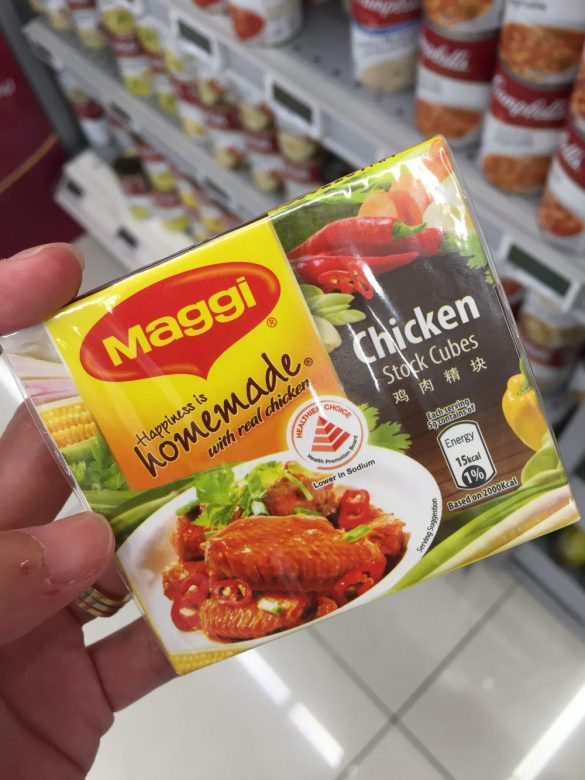 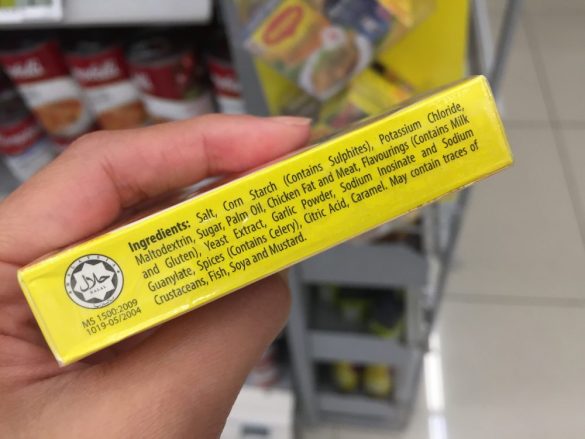 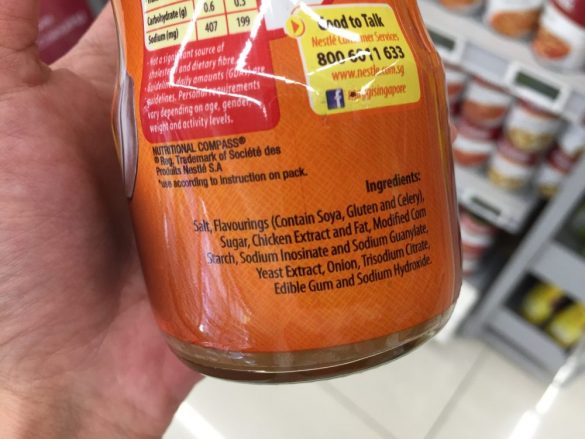 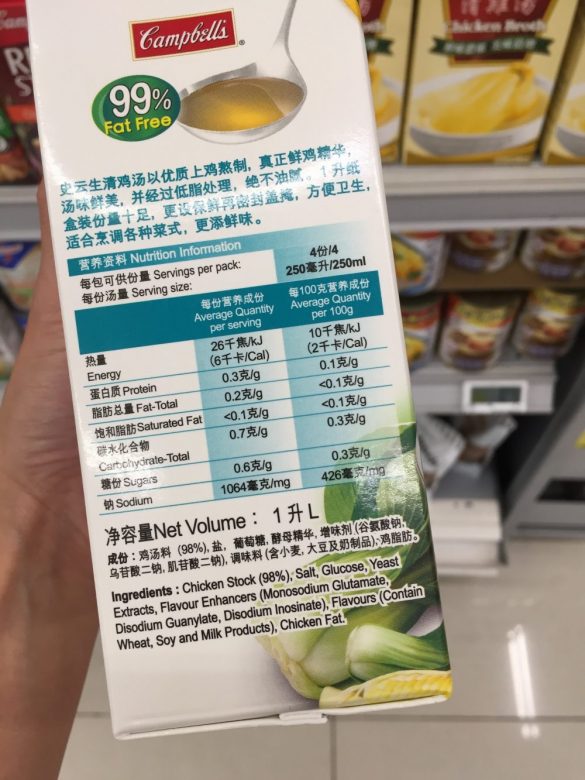 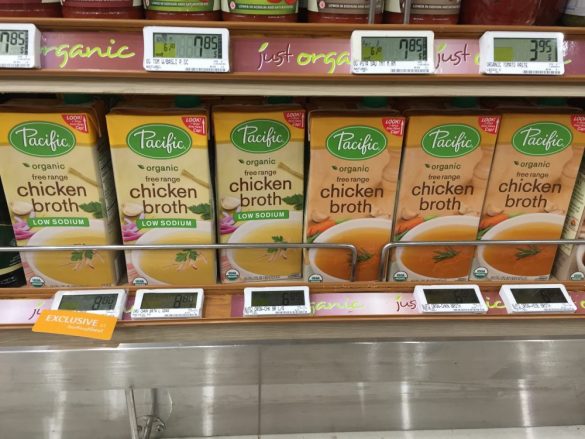 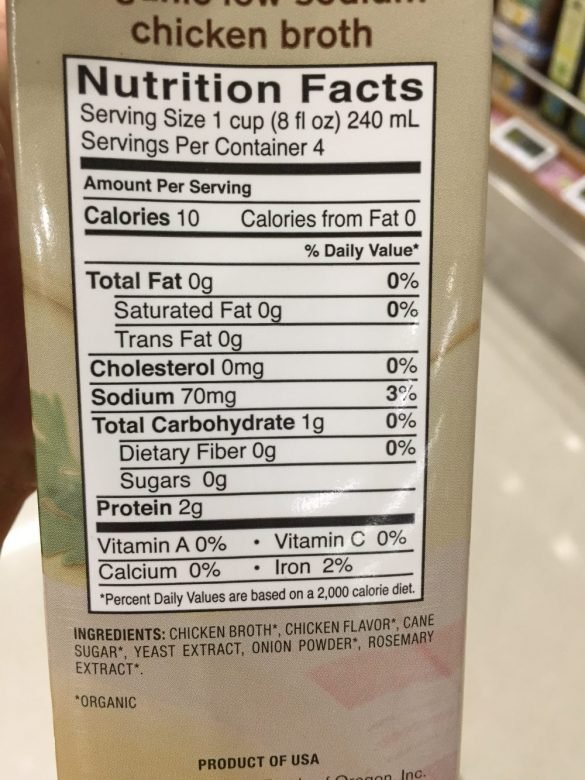 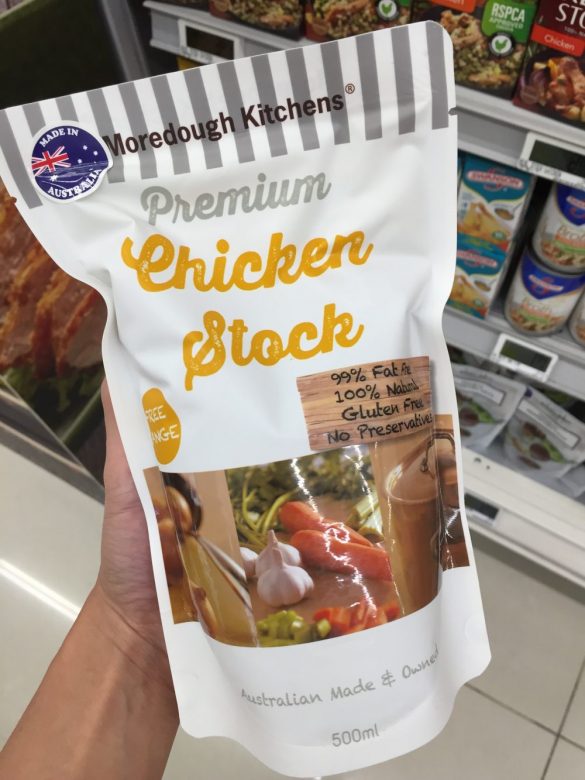 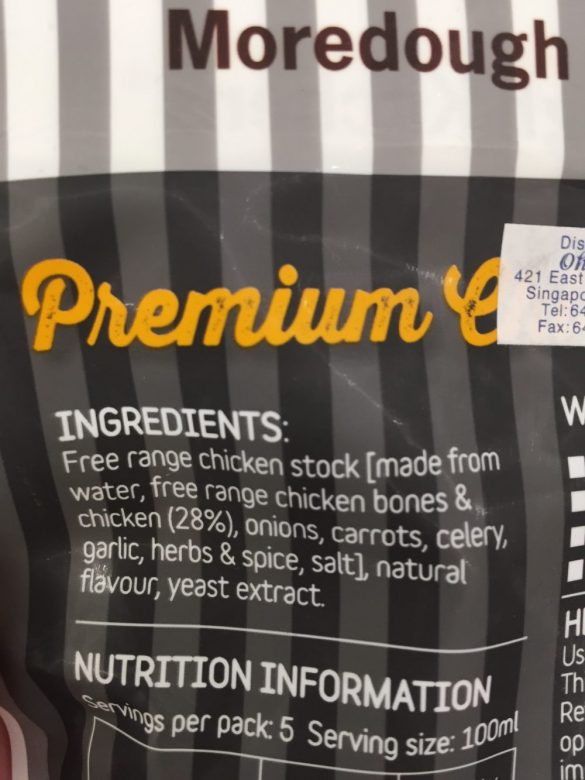 Best option is to use home made

I found that the healthiest and most affordable option is to make it myself. I recall the aroma of my grandmother’s hot soup waifing throughout the house when I was little. There was always a pot of something yummy bubbling on her kitchen stove. So I started with her recipe and it was nice and light. Then I discovered the wonderful world of souping where I learn how to extract the best nutrients from the bones. I have not looked back since.

Today, I always have a pot of chicken stock bubbling on the stove daily. You would be surprise at how easy it is to make it yourself, follow my simple recipe at Corey’s Skin Healing Broth. I started with chicken stock that took me 3 -5 hours. Now I am experimenting with bone broths that require longer hours. It requires a lot of patience, but when you see the look on your children’s faces as they enjoy a bowl of soul warming nourishing soup, you know it is worth it.

1 secret to understanding house dust mites allergy and 6 proven ways to combat it!

The one thing I wished I knew about...