Toddler Tantrums no more – from house to car in under 10 minutes, happy dance included!

DO YOU DRED MORNING STRUGGLES WITH YOUR TODDLERS?

Mornings are the hardest, I know. Throw in a few toddler tantrums and its a storm in a teacup.

As usual, we were running late. And my toddler refused to wear his shoes. Sounding like a broken record, I was repeating over and over ‘go wear your shoes!’. I was rushing around the house, gathering bag, keys, phone, fussing over the 1 year old. All the while my 3 year old toddler was calmly fiddling with his sticker book, oblivious to the flurry of activity around him.

‘GO WEAR YOUR SHOES!’ got louder by the minute, the sense of urgency in my voice falling to deaf ears.

Mummy tries threatening with ‘if you do not…then you will get it!’ (although I’m pretty sure I did not have an answer if he had asked me ‘get what?’), and that definitely had no effect.

So how did this end? Not good. The short of it, toddler made it to school (probably 15 minutes late), mummy made it to work (probably half an hour late). But the worse of it was how energy depleting these exchanges were. I kept thinking, isn’t there a better way? I was already setting regular routines so what else was I not doing?

Before I get to the HOW, it’s important to understand the WHY.

WHY YOUR TODDLER REFUSES TO COMPLY

concept of time, what is that can it be eaten?

Very young children have no concept of time. So telling a toddler that we simply have to leave in 5 minutes means nothing to him. He might, however, hear the increase emotion in your tone, in which case he may hang on tighter to the toy he is playing with because he senses it will soon be taken away.

Did she say to do what first?

Very young children are only capable of processing simple actions and not broad complex instructions needing 5 different steps to complete. When you say ‘we need to leave in 5 minutes’ you probably meant your toddler needs to put away his toy, put on socks and shoes, be standing at the doorway with his bag ready to leave in 5 minutes.

What’s the rush? My sticker book is more fun now

Very young children have not yet fully developed the sophisicated capacity to empathize, so bombarding them with reasons why you or they cannot be late is likely to be ignored. Imagine if you were doing something you found utterly enjoyable and someone comes along and told you to stop and do something you dreaded?

Screaming and rushing only serves to make them more nervous. Added together with a barrage of instructions this becomes a great recipe for an epic tantrum meltdown waiting to happen.

THE SIMPLE SOLUTION TO BETTER COMPLIANCE IN YOUNG TODDLERS

The solution is in the details.

This means you need to break down each task into something small, doable and easy to follow. Young children are very eager to help and mimic what adults do, so giving simple chores they can help with just before each transition is a great way to build inclusion. This makes them feel part of the process of leaving the house every morning. This also fosters teamwork and with multiple children, they may edge each other on to finish their individual assigned task.

Repetition is crucial. When an action becomes a routine it will eventually become just part of everyday life.

And that is exactly what I did. Instructions had to be small and specific. Even his school bag is in the same place every morning, he sits on the same small chair to wear shoes and socks. By the time I added the chore, he was an eager beaver to help.

BUT IM ALREADY DOING ALL THESE AND MY TODDLER STILL DOESN’T COMPLY?

What if you are already giving very specific instructions and your toddler is still not complying.

Then you may want to consider the way you have been delivering the instructions. Shouting from another room when you are totally out of sight will definitely not encourage compliance. Giving a string of instructions one after another before your toddler has completed the first task is also not ideal. Remember, you are instructing a little child whose brain can only process one small action at a time. Guiding them through each action and staying close to supervise execution is important.

Slowing down ultimately speeds up the transition.

I know the reaction is ‘impossible!’ and ‘it will only slow us down more!’ if I say slowing down will ultimately speed up the transition. I too was unconvinced in the beginning, but slowing down was the key to the final piece of the puzzle.

By slowing down, you will pay more attention to what your toddler needs to comply with the instruction you just gave. Slowing down sends out a calm, confident vibe that you are in charge. Your toddler will sense your authoritative tone instead of the usual nervous, high strung rushing.

Cut to six months later, I am happy to report we are doing mornings much better now. Occasional meltdowns yes because some mornings he just refuses to pick up the rubbish (bummer for mummy who has to throw it herself!). But mostly so much more compliant and more importantly, pleasant morning transitions of wishing each other ‘have a good day, I love you!’. 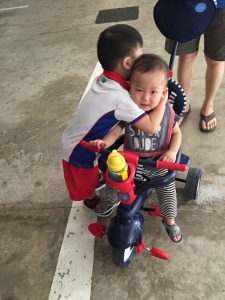 Quote of the Day

How to Identify an Eczema Mama

Our scars are tattoos with better stories

Baby to toddler: How to thrive with eczema

We all need a little pick me up...