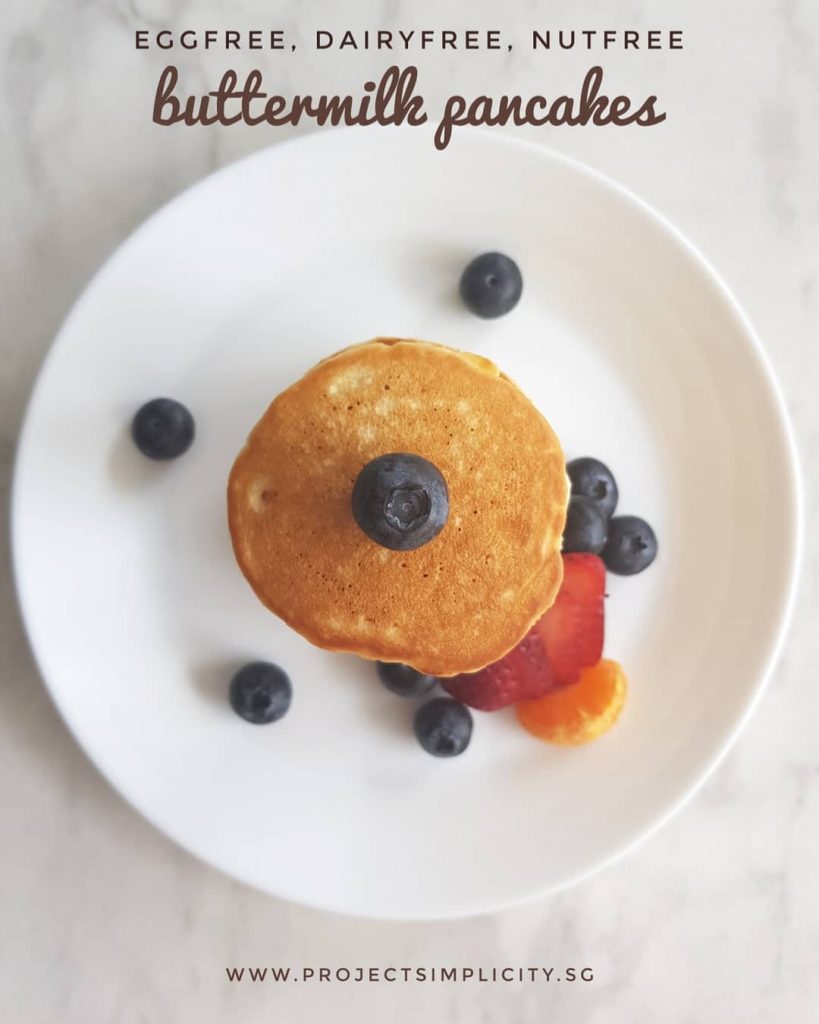 After Corey’s allergies to egg, milk and peanuts I have given up on ever buying commercial pancake mixes in Singapore. I needed vegan buttermilk pancake mixes which are so far non-existent in our speciality shops.

Ever since eggs and milk became contraband items in our house I thought I would never be making buttermilk pancakes ever again.

BOY, I WAS WRONG!

Only wished I had learnt this earlier. But hey, as with all the different challenges I have conquered since Corey’s diagnosis, once I found a good solution, everything has slowly fallen into place.

Contrary to its name, buttermilk can be made from vegan ingredients that have absolutely NO butter and NO cow’s milk. I feel silly not having realized this crucial fact after 2 years of a no egg, no dairy, no nuts home. It’s crazy we still call this vegan version buttermilk, when there isn’t a hint of butter nor cow’s milk anywhere!

Anyway, the only thing you need to remember about vegan buttermilk is

Because literally, the way to make buttermilk is to add 1 tablespoon of lemon juice (or vinegar) to 1 cup of non-dairy milk of choice, let it stand for 5 minutes to allow the bubbling reaction to happen.

You can thank me by whipping up a batch of fluffy pancakes and tag #projectsimplicitysg along with smiley faces enjoying pancake Sundays again!

Just look at the BUBBLING GOODNESS on these puppies?!!! Makes me wanna make a batch right now even though Sunday was yesterday. 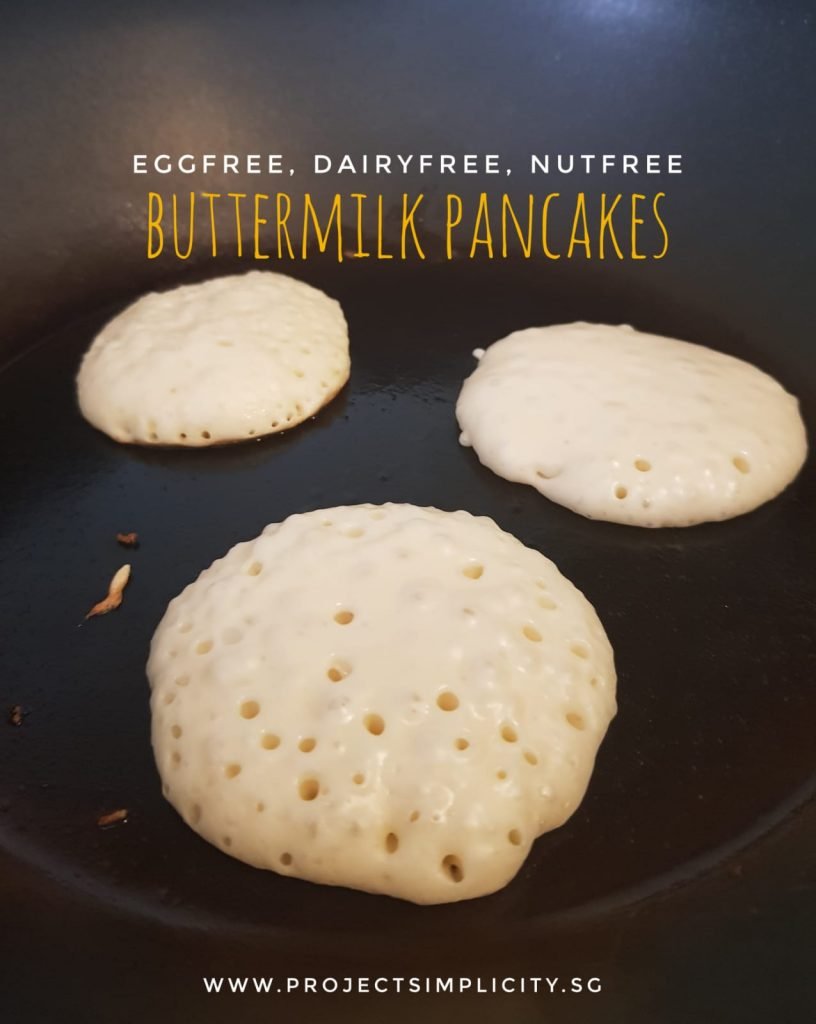 I used apple cider vinegar and organic unsweetened Soy milk. You can use any vegan milk and any acid alternative. Just remember the proportion is 1 tablespoon of acid to 1 cup of vegan milk. You can reduce the amount in proportion to how much liquid you need.

Look at the golden brown goodness.. aren’t they just calling GET IN MY BELLY!! 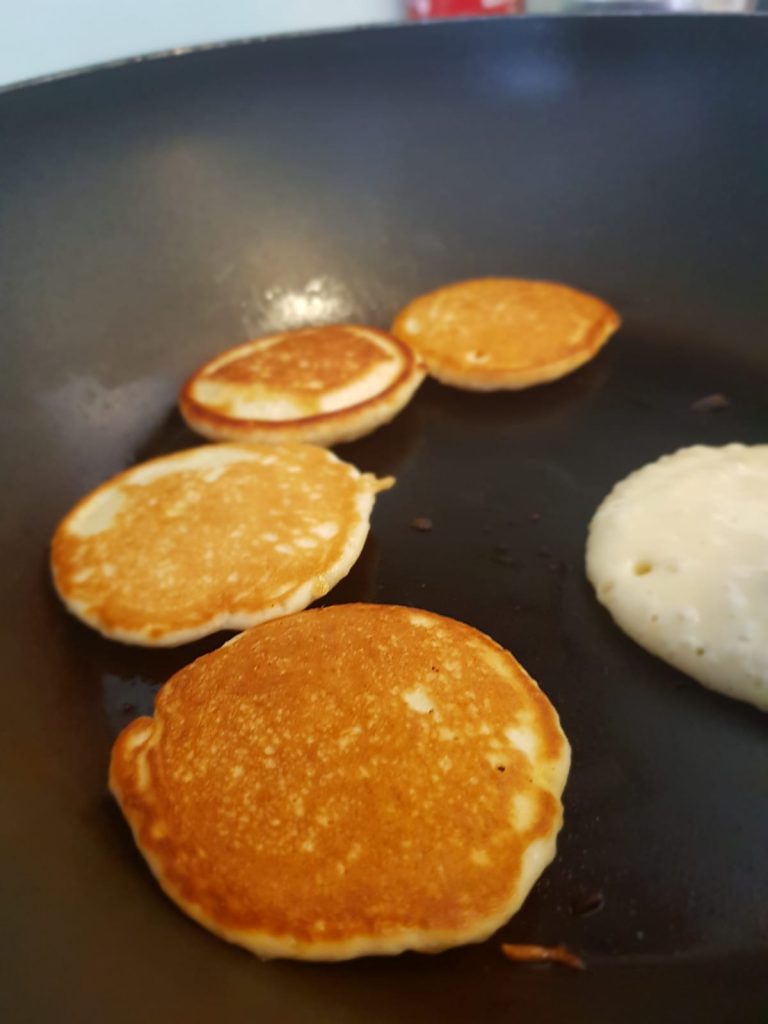 golden brown vegan buttermilk pancakes get in my belly 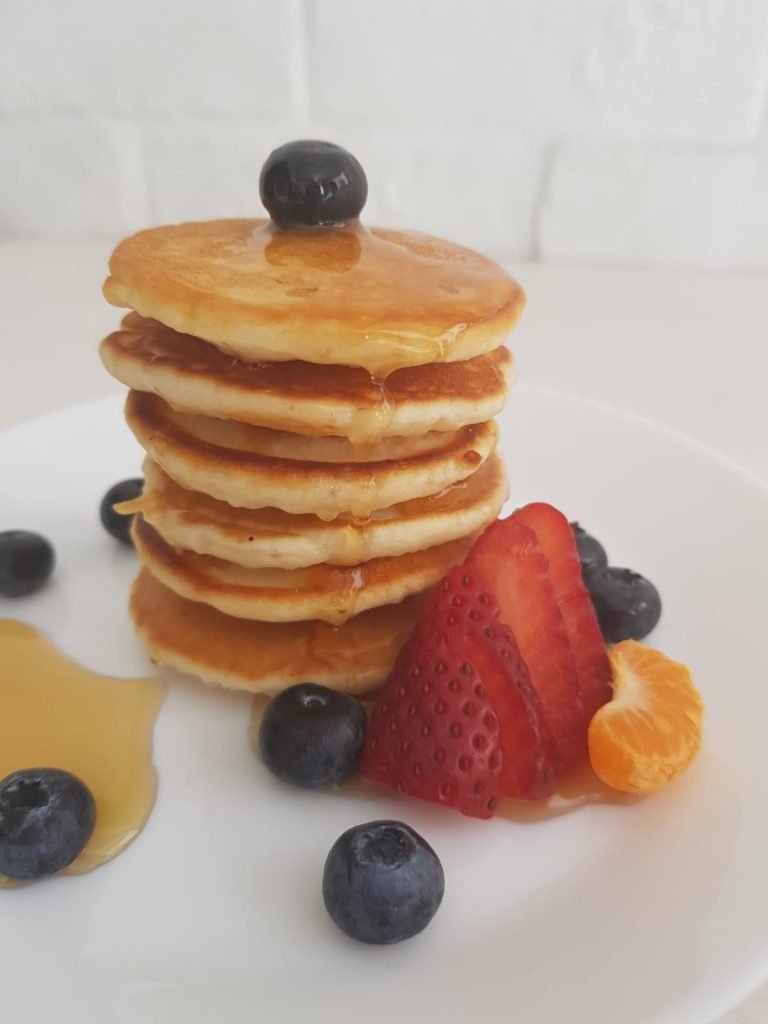 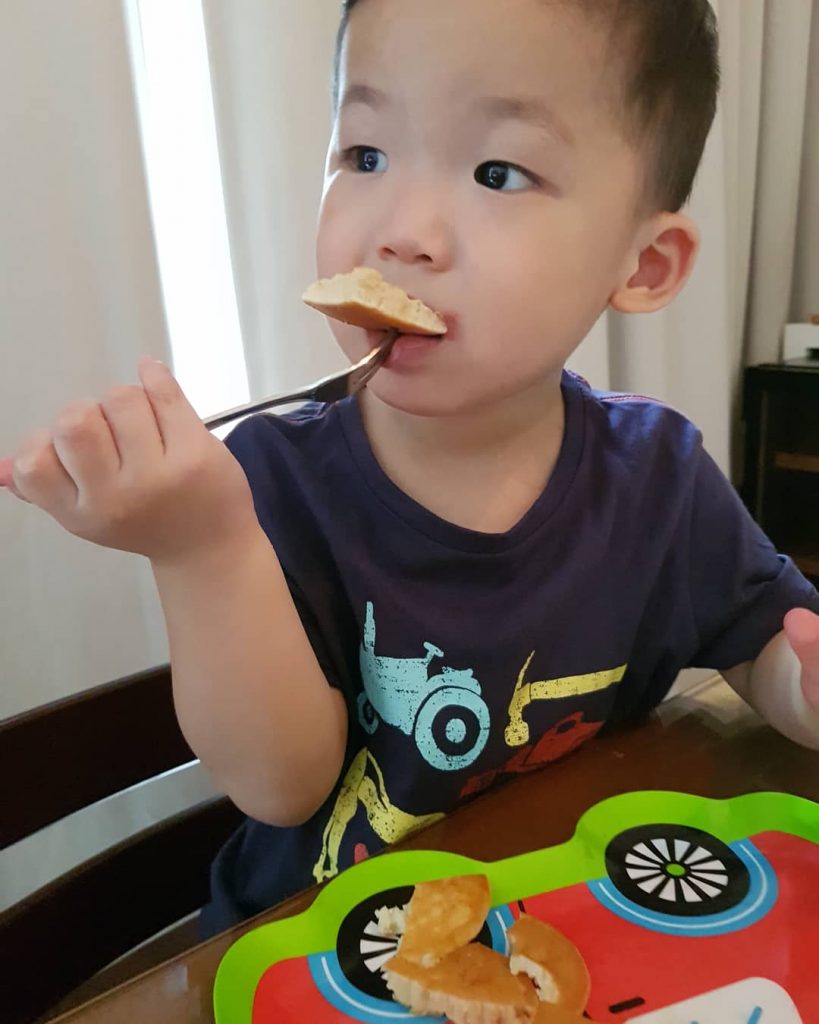 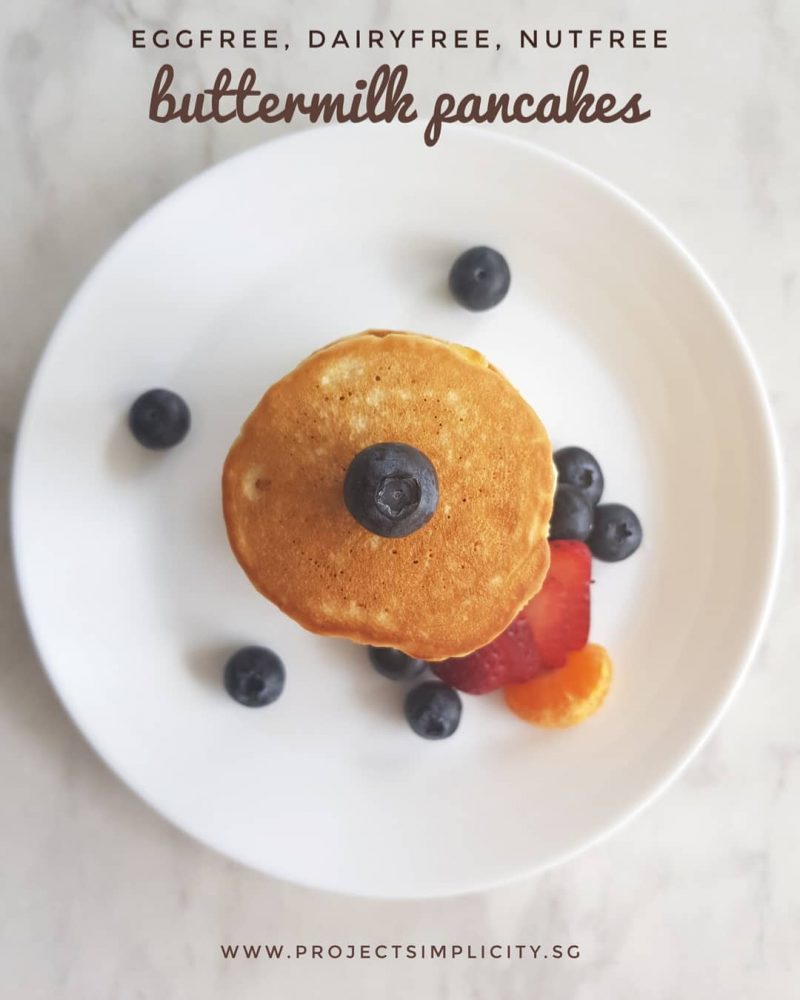 Step 1: Prep your vegan buttermilk by mixing 1 tablespoon of lemon or vinegar to 1 cup of vegan milk. Let it stand for 5 To 15 minutes. I like using room temperature soy milk which for me ‘wakes up’ the fermentation process. Your plant buttermilk should look a little curdled after 5 minutes.

Step 2: Meantime, mix the sugar and flour. Use caster (or icing sugar works too) sugar as the smaller sugar crystals will yield a softer fluffier pancake.

Step 3: Add your buttermilk mixture gradually to the dry ingredients in step 2. Do this step slowly to ensure a ribbon-like consistency for the batter and you are ready to make some fluffy pancakes! You should see small bubbles forming in your batter if your buttermilk was done right.

Step 4: Cook over a medium to low fire on a non stick pan till golden brown on each side. Cooking the pancakes are more technical than most imagine, especially with this version using a non traditional buttermilk. It takes a little patience and experimenting to get right.

Add syrup and jam or fruit for some colour or just eat them on their own! I did not try adding any fruit to the batter as I wanted to test out the buttermilk rise. My next batch I'll probably add some bananas and blueberries.

Use room temperature soy milk to speed up the buttermilk souring process. If you see some curdling in the soy and vinegar mixture, you are good to go. I have also made a version of this pancake using flaxseed 'egg' as a replacement which works great and is healthy too! If your plant buttermilk did not curdle, the problem might be due to the kind soy milk used. Look for the plant milks that have a higher protein content as those are less diluted. The one I buy is Pacific’s Organic Unsweetened Soy Which has 9grams of soy protein. The batter should have a ribbon-like consistency so adding the buttermilk to the dry ingredients SLOWLY. The batter should be able to fold over itself when poured. Make a small pancake to test out whether you like the rise and to judge if batter should be thicker or thinner so you adjust with more buttermilk or more flour accordingly. These pancakes do have a denser consistency than those made with eggs. However its damn close to the real McCoy.