Of costumes, complacency and birthdays – just another day parenting an allergic child

This past Friday was racial harmony day. It would be easy to mistaken the calamine I applied on Corey’s face as dry run for a Hindu Thipusam costume. It was in fact not cosmetic but piled on in an attempt to calm the rashes and itch that started an hour after dinner. 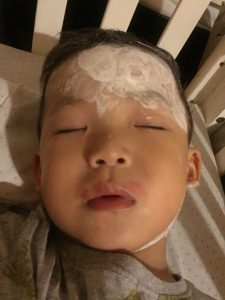 As with previous allergic reactions, once the symptoms start, they spread like wildfire. Incessant scratching and fussiness is Corey’s first signal to us that something is not right. Rashes appeared on his face. Watching him rub and claw at his eyes like a madman is akin to watching a horror flick. If they weren’t attached to his face, he could probably rubbed his eyes right off. Anyone watching this scene for the first time usually freezes. But this being our 5th allergic episode, we’ve become veterans to this unsettling image.

So the hubs and I move into action mode.

We fired off instructions to each other with clockwork finesse. One of us calmed him down with his favourite youtube clips and checks his skin for more rashes. The other swiftly prepared the antihistamines and creams and administers them.

We will never know the root cause of the allergic reaction

We had used a different brand of pasta sauce for dinner. Even though the ingredients were safe, his reaction told us otherwise. That’s the difficulty in living with food allergies.

Many times, we will never know for sure what caused the reactions.

Cross contamination is a very real problem where foods that are said to be void of allergens can still contain traces due to shared cooking facilities.

Watching the minutes tick by

I’m sitting beside Corey’s cot, watching him doze off as the antihistamines take effect. My ears bent close to his face, listening for any irregular breathing as the first signs of anaphylaxis. He opens his eyes momentary and said ‘pain’ as his hand reached for his forehead. I shine the torchlight in my hand on his skin just to check the rash wasn’t spreading. My other hand is holding his hands to prevent further aggravation on his skin.

In the meantime, the hubs is walking in and out of the room, giving instructions to the helper to prepare our emergency bag, calling my parents to standby to watch our older son if we had to rush to hospital.

While we didn’t talk, we were both silently wondering whether this was going to be another weekend spent in the hospital.  I hoped upon hope that it would not be, since this was also the hubs birthday weekend, and we had so much planned.

After 2 hours of peaceful sleep and no new rashes, I began to breath easier. We had dodged a bullet this time. Listening to his easy regular breathing, I reflected on these past few hours. My husband and I had been in sync the whole time from start to finish.

This is a far cry from the multiple allergic episodes last year. Yes, each allergic episode is different from the last, and we got lucky this one was mild. Memories of the screaming, finger pointing and anxiety taught us many lessons in allergy management. Most importantly, we handled this episode like a well oiled machine.

My Lessons learnt – no room for complacency

The past 6 months have been a period of calm. Ever since our horrid Leftose (egg contamination) reaction in December 2017, we have not had any major allergic reactions. As much as Corey is stronger, it is by no means a sign he has outgrown anything.

And I while do try to balance the needs of keeping him safe with allowing him to try new things, this episode is a clear sign that there is no room for complacency in our battle with his food allergies.

It is best for food allergic and highly allergic people  to eat clean diets with lesser processed and commercial bought sauces and flavourings. Tonight I had let my guard down and I must not let it happen again.

And another episode passes- back to weekend celebrations

Parenting an allergic child has been my toughest job yet. And when things are good, it is easy to take for granted and forget that his allergens can be hidden in the most unassuming daily food items. I can wallow in self blame or do some finger pointing as to why and how this allergic reaction occured. Or I could make the best of what’s left of the weekend and continue our ‘daddy birthday celebrations.’ I choose the latter. While I watch the family enjoy the festivities, I always have one eye on Corey’s exposures. Cus thats what allergic parents do, keep our children safe by mentally evaluating everything they contact with.

Oh and how can I forget to wish the hubs, my B, the biggest birthday wishes. We have kept the kids alive for another year and I could never imagine doing it with anyone but you.

The one thing I wished I knew about baby eczema

We all need a little pick me up...