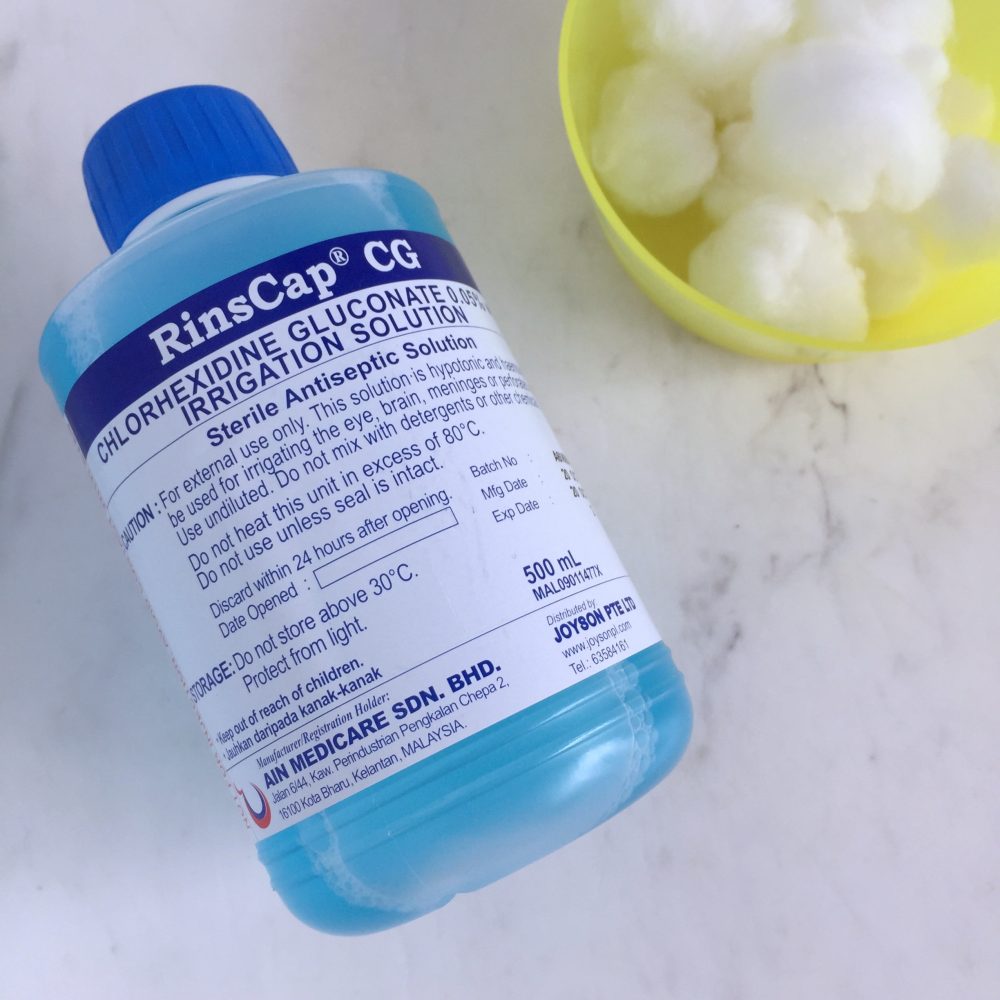 I use chlorhexidine gluconate daily in Corey’s eczema skincare regime. And over the past 15 months we have seen good results.

What is Chlorhexidine Gluconate

A skin disinfectant and antiseptic commonly used before surgery procedures. There are various concentrations and the one commonly found in local pharmacies is 0.05%. It can be used for cleaning wounds. It is also commonly prescribed by dentists as a bacterial mouthwash.

I learnt from chlorhexidinefacts.com; it is effective like antibiotics against bacteria, but unlike an antibiotic it is targets all bacteria and fungi. Chlorhexidine’s antimicrobial activity has been documented to last at least 48 hours on the skin. You can read more about this at Chlorhexidine Facts: Mechanism of Action

chlorhexidine inactivates microorganism with a broad spectrum other than antimicrobials (ie. antibiotics) and has a quicker kill rate than other antimicrobials (e.g. providone-iodine) It has both bacteriostatic (inhibits bacterial growth) and bactericidal (kills bacteria) mechanisms of action, depending on its concentration.

Its role in eczema skincare

Eczema skin is weak and prone to bacteria infections. So its easy to see that the role of chlorhexidine is to keep the skin clean and keep bacteria at bay. It goes along the similar principle of bleach baths and sea salt baths in eczema skincare.

Why I prefer it over bleach baths and sea salt

Chlorhexidine gluconate has lesser risk of stinging and irritating the skin over bleach and sea salt baths.

Over the past year, I have tried a lot of different baths and washes on Corey. Even though I followed doctors instructions on dilution, I was always nervous during bleach baths and sea salt baths. There was always a fear of irritating his infected skin further. And it was very hard to tell from a non communicative baby whether it was stinging or otherwise.

How I use chlorhexidine gluconate in Corey’s daily eczema skincare

It was Corey’s allergist who introduced chlorhexidine gluconate as part of his skin care treatment. We use a very light concentration of 0.05% which is readily available at all pharmacies. I first spot tested on some good skin to ensure no adverse reaction before use. Given his infections were so extensive I was naturally apprehensive of an anticeptic. However, it was comfortable for Corey and he has improved by leaps and bounds since using. You can read about his healing journey here at Eczema Babies Healing Plan – Lesser Stress In 5 Steps.

Corey has a morning soak everyday, after which I will check his skin for rashes and infections. Doctor’s instructions are to clean the rash patches with the chlorhexidine solution before applying creams. I also clean good skin where rash patches had already healed. Often even after the rashes had subsided, his skin would skin be rough and bumpy (but otherwise not itchy). Chlorhexidine gluconate goes on these rough patches as well. Then, a thick layer of moisturiser goes all over. We have been doing this routine twice a day since he was 6 months old.

I have read a few reports saying that chlorhexidine gluconate could possibly dry the skin. We always used in conjunction with a thick layer of moisturizer afterward. So to date I do not think it dries Corey’s skin and we have not experienced any side effects.

After using this treatment for the past 15 months daily, I have seen his rash patches improve tremendously. Additionally, bacteria infections on his skin are lesser too.

This antiseptic will continue to be a mainstay in my eczema skincare regime. It is also handy when my older son get cuts and falls. Do give it a try if you can find it at your local pharmacy.

But as always, do discuss this with your doctor first if you have any concerns. What works for one person may not for others. Eczema skincare requires quite a bit of trial and errors so check in with your doctor if unsure.

How to heal allergies

The one thing I wished I knew about...

3 Simple questions you should ask: Allergist or...