With one kid falling sick after the other, the past few weeks have been nothing short of exhausting. And now with our helper also sick, it was time to kick our nutrition into high gear.

Ordering take-aways is not an option with Corey’s food allergies. It’s hard to find restaurants in Singapore that accommodates his allergies to egg, milk and peanuts. And even those that do, by the time I finish scrutinising their menu my kids are screaming murder from hunger.

So at times like this, I have to get creative whipping up a fast one pot dinner.

My Tefal Induction Rice Cooker to the rescue

On days like these, I’m glad hubby bought me an induction rice cooker (big smoochies!). My Tefal one has a porridge setting that can let me set how I want my rice texture. It also has a congee and porridge setting. So far I’ve only tried out the porridge setting, maybe next time I’ll try out the congee setting and report back on the differences.

I press a few buttons, then its a matter of loading up the aromatics with sesame oil and ginger. For extra nutrition to boost everyone’s immunity I also add in half a litre of Corey’s nutritious skin healing bone broth.

Chef Riley gets busy and saves our dinner!

Because it is so simple to use, even my 4 year old can learn to cook safely without major mishaps. He did scald his hand a bit on the side of the pot. But that was a good lesson that cooking requires high heat and that he has to be careful. He really enjoyed watching the garlic and ginger sizzle in the oil. The nice smells convinced him to try a little bit of ginger. To my horror, he proceeded to pick out all the rest from his bowl after. Every. single. one.

Note to self: if having a bad day, omit the ginger, onion and everything else that is offending to a picky toddler! My bone broth recipe has enough nutrition to trump a few small strands of ginger. Alternatively, cut these aromatics into big chunks which makes fishing them out easier.

Excited toddlers who insist on helping to serve hot food did not allow me the luxury to take photos of film videos! But we will be doing this again soon or even try other recipes.

As Riley puts it “Mummy! I’m asking yeye and grandma to come for dinner next week because I’m cooking!” 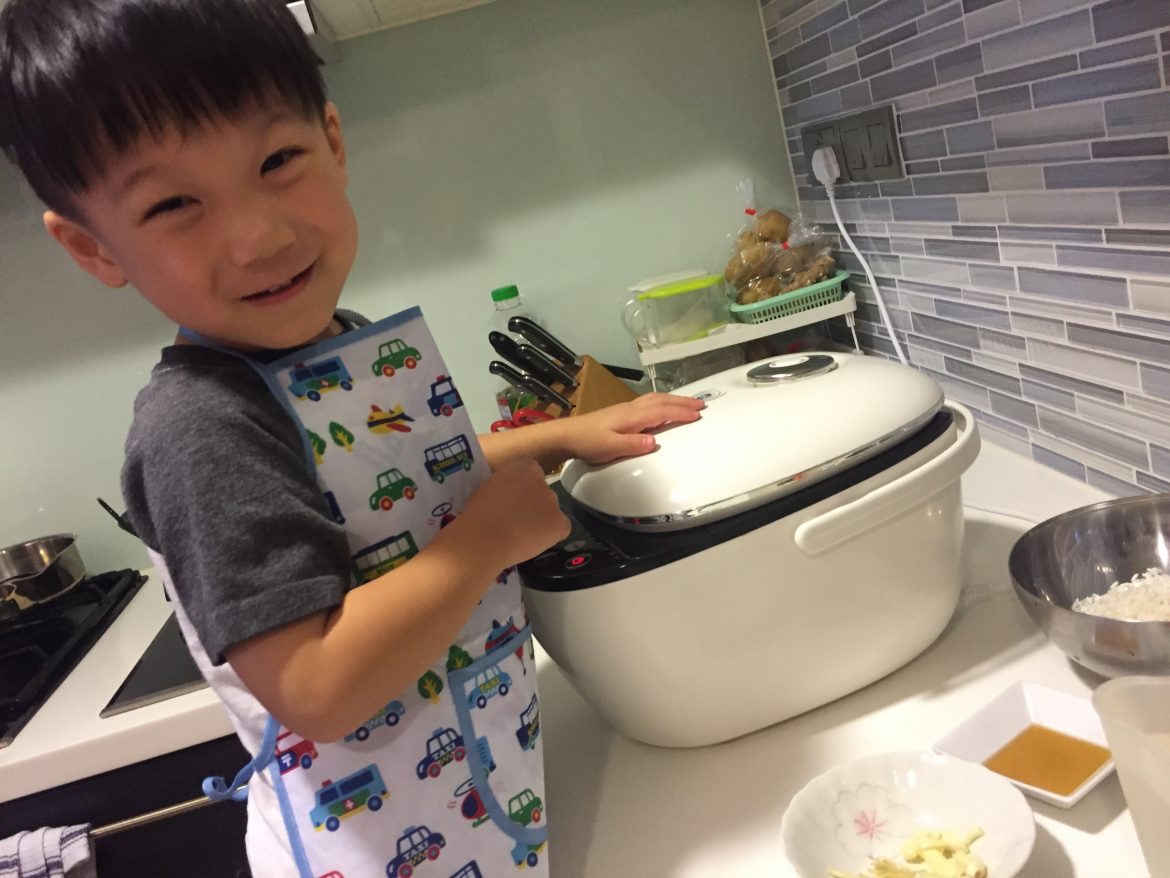 One enthusiastic 4 year old to help with the cooking is a bonus but not a must. Also, an induction rice cooker is great, but this same recipe can be made with a normal pot, just have to take note not to dry out and burn the porridge.

If you have a Tefal Induction Rice Cooker like our, press the porridge button and you will see the time setting changes to 40 minutes. Then the induction pot will heat up and a whistling sound can be heard.

Step 2: heat up oil, aromatics, and throw in other ingredients.

Once the pot has heat up (take 10 seconds), then its time to put in your sesame oil, garlic and ginger. After that throw in other ingredients like carrots, potatoes, and any other left overs from last night's dinner.  Do take note to debone properly if cooking for very young children. Step 3: put in washed white jasmine rice. Stir a bit to coat the rice with sesame oil (Or in Chef Riley's style, stir it a lot because its fun.)

Step 4: pour in the water and bone broth stock.

Step 5: give it a last stir, close the lid and wait for yummy goodness in 40 minutes!